Why Gym Owners Shouldn’t Waste There Time With TikTok 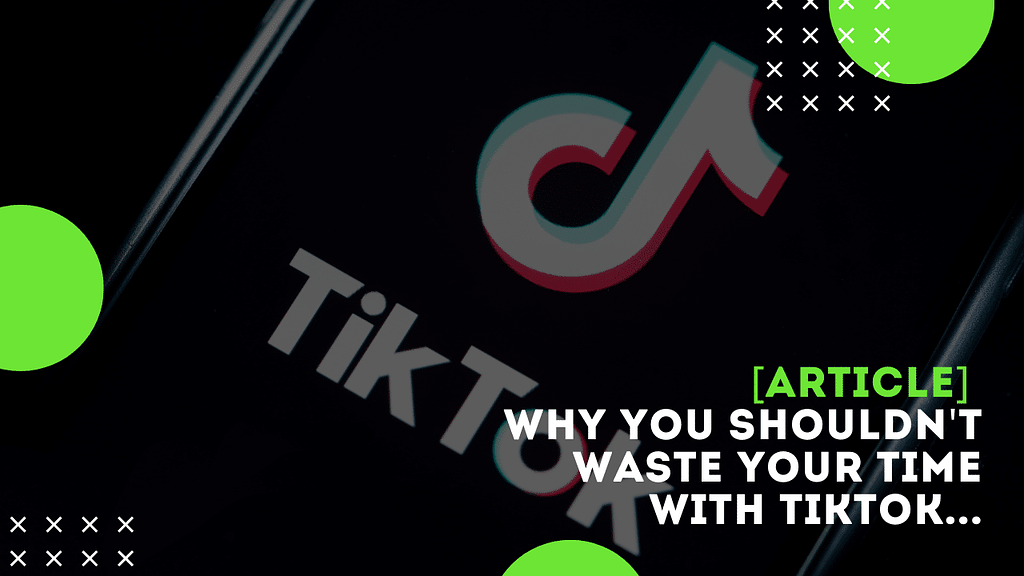 These days many markets have gotten competitive as more and more gyms in the biggest markets are struggling to keep ad costs down. Markets like Los Angeles, New York, Miami Beach are near impossible to get a reasonable cost per acquisition using the proven methods with the most popular platform, Facebook.

Coming out of the quarantine, TikTok has seen meteoric rise, going from just another app where trendy tween’s hang on the web to my mother-in-law literally showing me videos of “Karen” at a Sunday dinner. Yes, my mother-in-law has officially become cooler than me, lol.

But if I’m honest, that’s when I know something has found the mainstream (or late majority as Eugene Schwartz calls it). When my in-laws tell me about it.

So it’s compelled me to dig deeper to see if this platform has any real viability. My main reason, we help gym owners streamline life and business and a lot of it has to do with marketing. Because without reliable, repeatable marketing systems nothing else in the gym will work for very long.

And with all the shiny objects and noisy social media information the average gym owners attention span is about 14 seconds, and planning rarely exceed this month.

Meanwhile, they’re so confused about what to do, they look for things that look like work that are really just enormous wastes of time. Because of this they look backward over their last month and see their business as a giant tangled knot of chaos.

My job is keeping gym owners from wasting a single second of time.

FOMO is a real thing, the Fear Of Missing Out. Whenever there is a new app, every business owner wants to invest time in to it hoping it will be the next Facebook. Because if they’re right they’ll explode with platform. It’s like winning the lottery.

It wasn’t long ago that Snapchat was all the rage and every gym owner was spending enormous amounts of time on buying frames and whatnot. Seriously, the same exact posts you’re seeing in groups about TikTok being next are almost identical to what you saw with SnapChat, which has completely flatlined as a viable competitor to the perennial king, Facebook for local brick n’ mortar gyms.

The things you are hearing are “I got 4k views on one video recently” and “my engagement is super high”. Keep in mind, this discussion is going on in Facebook Groups (lol). That should tell you something.

Anyways, let me get to the hard points, the objective stuff that I see that makes me come to these conclusions.

First, just so nobody thinks I’m new to the game, I’ve been doing digital marketing since 2007, longer than 99% of people who call themselves digital marketers. I used to manage $15k-$20k a month worth of ads for a local mom-n-pop landscape business in the early days of Google Adwords. It made that business as much as $5 million per year before anybody besides college students were talking about Facebook.

Everything I’ve ever done with ads has always been done with an objective, data-driven approach. I don’t leave things up to guessing. I want to know exactly what happens to a dollar when I invest it in to a marketing campaign.

I remember competitors at trade shows in that landscape niche laughing at us for not marketing in the newspaper, funny how most of them went out business while we grew through the 2008 recession.

Then in 2014 we started to mess with FB ads for both our gyms, again, it was early and people in the industry laughed at us, because we were not using Groupon. Again, we grew while they floundered.

So, as you can see, I am not opposed to investing in a platform early, BUT…

Both Google and Facebook are unicorns, both platforms are about as close to required for almost anybody to go about their day-to-day life and be involved, and the information traded across both platforms is incredible.

Why both platforms worked well and survived is because they overdeliver on data for marketers, and that’s what every good campaign needs to scale, data.

With both Facebook and Google we’ve been able to build complete funnels behind the ads we put on them and test numerous combinations of imagery, copy and targeting and literally track down to the penny what our return on spend is.

TikToks marketing platform and data aggregation is not near as robust and because it’s so new the data is incredibly volatile.

So far, with TikTok, the organic reach is artificially inflated because TikTok is boosting it organically to get users on the platform and we are just getting out of quarantine where people needed something new and exciting to keep their attention but  but for a gym reach doesn’t matter unless those users are within a radius of your gym.

Also, eventually TikTok is going to want to fully monetize its platform. They are going to start cutting down on exposure unless you’re boosting your posts.

What everyone with an audience won’t tell you is that they didn’t have that audience from the start. They posted consistently enough to find relevance in the algorithm, so they still had to do the work. And that same regular publishing you’re doing is working not because its TikTok, but because you’re actually publishing stuff people want to watch! (which will work on any platform).

The only caveat, if you’re the type of person who loves being a goofball on short videos then it might be worth doing anyways, you need to find the platform that you like to produce on because if you enjoy it then you’re likely to do it.

Keyword: PRODUCE. Not consume. Just because you’re wasting enormous amounts of time on the platform consuming content while your gym is shutdown does not mean it’s the best for you to produce on.

Facebook has entire communities running through it, events run through it, they’ve added stories and the watch feed is creeping in on YouTube’s share of daily watches. They’ve had to continue to innovate  but their platform allows them to do that as the platform is not just a video feed. It’s everything.

TikTok is limited in scope to the type of media it is known for and primarily serves. They might start to innovate to become more like Facebook with other types of feeds but then they’ll just be a (much) crappier version of Facebook that is 10 years behind.

The odds are better that TikTok is the next Vine, Yahoo or Snapchat, not the next Google, Instagram or Facebook. The getting is still incredibly good on those latter platforms in most every market anyways, you just need to know how to do it right so you don’t just copy everyone else and actually stand out in your market. Which is a whole ‘nother discussion altogether.

Bottom line: if a platform can’t be completely systemized with reliable and repeatable data then it is not worth your time. It doesn’t matter what the upside is, it’s 100% speculation and you don’t have time to figure out another shiny unproven object.

Just be weary of the proliferation, it’s a sexy headline to say thing like “the next Facebook killer”. Don’t waste one more minute on this is if you have yet to even use the systems that already work.

I’ve published 100’s of videos over the last year for BLG, I rarely even see double digit likes, I almost quit a couple times because I was looking at the wrong KPI. Then people started booking calls with me and when I asked them how they heard of me they said it was one of my videos so kept publishing.

It’s not about width (volume), it’s about depth (value).

Time is not replenish-able, your time is limited, and for every minute you spend on a platform it should be able to get you quantifiable results, because dollars allow you to buy your future time-freedom back.

It’s going to be a long time before any gym owner is getting a call saying “hey, I saw your dancing video on TikTok and want to become a member.”

I might be wrong but you wont find our gym owners on social media talking in the meantime, they’re doing. They are deliberate, scientific, see business clearly and always win.